Hrdaya Yoga International is an expression of Yoga as understood, taught and practiced by Jonathan Evatt. 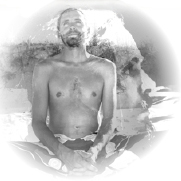 Jonathan was born and raised in Auckland, New Zealand. His earliest recollection of entering into the Field of Yoga in this body goes back to when he was under five, and stayed with him since then. Yogic awareness arose spontaneously in his youth and it moved him to begin exploring it in different ways at different times. From as early as he can recall, he was aware of the subtle underlying realities within his life and the world around him, and he was prone to questioning anything that did not make sense according to his Heart. In his experience this meant questioning and later investigating the vast majority of social, religious, medical, economic, spiritual, and political structures of the world in which he was raised.

Jonathan spontaneously started his first yoga practice when he was 7. This involved lying in a bathtub of cold water, whilst observing his breath, and controlling his bodily reaction to the temperature. He has maintained this particular practice to this day.

At 16, Jonathan took up the practice of Hatha yoga asana from an old yoga book his mother had on the bookshelf in their home. The book was from the 1960s, and it provided a simple outline of yoga principles, asana, and pranayama. After reading Zen Mind, Beginner’s Mind, around that same time, Jonathan started actively practicing sitting meditation. At around 16 to 17 he learned about various Taoist practices of cultivating sexual energy, purifying the emotions and astral body, bone marrow breathing, Chi Kung, and other Taoist yogic practices.

What he learned from Taoist yoga made perfect sense to him, so he took up the practice of working with his chi and sexual energy on an almost daily basis before and after school. A few years later he was initiated into what is referred to as spontaneous Qi Gong (Zi Ran Gong or Zi Fa Gong), where the practitioner enters into conscious relationship with the movement of prana (or Kundalini) inside and around the body, allowing the body to spontaneously enter into its own form of what might be likened to Tai Chi. He has also studied a number of martial arts including Karate, Thai Kickboxing, and Shaolin Kempo (a traditional style of Kung-fu), which is his preferred style.

At 19 he met two advanced Yogis whom he immediately recognized from another time. Soon thereafter he moved to the South Island of New Zealand to live and study with them. They introduced him to Kundalini yoga, kriya yoga, Eternal Yoga, and various practices intended to activate the subtle structures of the body-of-light; to initiate and realise the process of Ascension; and to develop conscious awareness in the energy centers above the head and in the Earth. He remained in close contact with them for over 7 years, and to a lesser degree until the present day. At 20 Jonathan left New Zealand to follow the call to connect with certain locations on the Earth, with the land, and with certain people; and to meet teachers he was guided to spend time with. A few months before 21 whilst meditating in the Swiss Alps with a rather eccentric Buddhist monk, Jonathan spontaneously “remembered” his essence as emptiness and re-membered an aspect of our Buddha nature.

In a vigilant attempt to comprehend
the Absolute nature of my Realisation,
I stumbled across my own non-existence
and fell into vast Vacuity…
(Switzerland, 1995)

Since the mid 1990’s Jonathan has spent considerable time in the company and tutelage of numerous living masters around the world. This has included a self-realized Buddhist practitioner in the Swiss Alps, two Hawaiian Kahuna (Shamans/Priests) in America, Amazonian shamans in Peru, a number of self-realized yogis, an advanced Yogi and Kundalini Master from Switzerland, numerous talented spiritual healers, a bush doctor in the Caribbean, a number of master Ayurveda practitioners, and numerous teachers he has made contact within the Inner Realms of his own Consciousness. During this period of exploration Jonathan remembered and integrated a wide range of universal spiritual wisdom that has been available to Man throughout time.

He now actively travels the world sharing what he can through a wide range of topics taught in workshops and retreats. This website arose as an extension of the Hrdaya Yoga Retreats Jonathan has been invited to teach internationally over the past few years. His intention for this site is to provide those who are interested with an easy and accessible taste of the essence of Yoga.

Visit www.jonathanevatt.com for more information on Jonathan and his work internationally.

To read Jonathan’s commentary on this biography, click here.